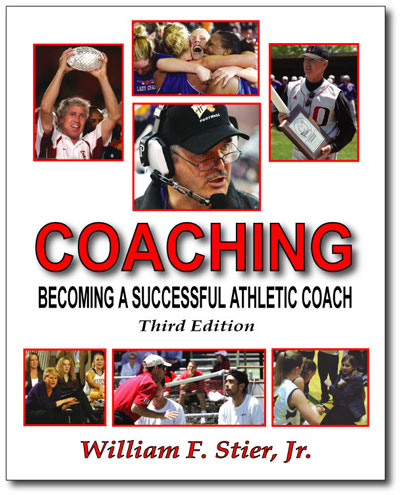 This is the third edition of the popular book about coaching which was originally titled Successful Coaching: Strategies and Tactics published in 1995 and the second edition titled Coaching Concepts and Strategies published in 1998. The third edition has some significant changes and improvements. These include the addition of numerous new concepts (for a total of 452) with updated and expanded information applicable for the current coaching scene. This information includes additional insights into the challenges facing coaches in today’s ever changing and problematic environment in the 21st century. In addition, questions at the end of each chapter have been revamped where necessary to reflect current and relevant topics. And, finally, there are new research orientated questions at the end of each chapter which ask the reader to conduct surveys, interviews and conduct library research in an effort to gain additional information, trends, and data on a variety of relevant sport and coaching topics.

Coaching: Becoming a Successful Athletic Coachwas written from a very practical perspective to provide you, the would-be or current coach, with a realistic insight into the world of coaching amateur sports in the 21st century. The information, suggestions and recommendations presented are based on sound theoretical constructs coupled with the practical experience of the author who was a highly successful junior high, senior high and college coach and athletic director for almost 25 years. The information contained in this book is applicable at all levels of sport competition including youth sports, junior and senior high school teams, as well as the college or university level.

THE SCOPE OF THE BOOK

This book is written for current and future coaches irrespective of the sport or sports coached. This is not a "how to" book in coaching a specific sport such as basketball, field hockey, football, softball, or gymnastics, etc. Nor does it deal with the so-called Xs and Os of coaching a specific team or sport. Rather, the book has been written from a generic perspective, that is, the information presented is applicable for the coaching of all sports and at all amateur levels of competition.

The objective of this book is to help the reader become knowledgeable in terms of what it takes to become a successful coach and to develop specific skills which will facilitate and significantly enhance one's competency level in coaching. In essence, this book has been written to help the reader become a more knowledgeable and skilled coach—a more effective, and efficient coach, one who understands the complexity of the varied and multiple tasks facing the modern day mentor.

Presented throughout the book are 452 Coaching Concepts. These Coaching Concepts are general statements or principles that serve as guidelines for coaches in terms of very specific coaching situations. Each of these concepts or guidelines can serve as a potential focal point of decision making for the athletic coach. These principles and guidelines can also aid the reader in developing a greater depth and breadth of knowledge relative to coaching a competitive sport. Succinctly presented, these principles involve sound coaching strategies and successful teaching tactics that are applicable for both the would-be and current mentors.
Additionally, at the end of each chapter there are two sets of questions for the reader to respond to. The first set of questions for each chapter are general questions that may be addressed from the reading of the chapter. The second set of questions for each chapter involves research questions that the reader must secure the answers to. The answers to these questions can be obtained through surveys, questioning individuals and library/WWW research efforts.

Coaching: A Problem Solving Approach 2e
A companion book to be used with Coaching: Becoming a Successful Athletic Coach

A companion book titled: Coaching: A Problem Solving Approach (Second Edition), also available from American Press, Boston, MA, and also written by the author, is recommended to be used in conjunction with Coaching: Becoming a Successful Athletic Coach.

Coaching: A Problem Solving Approach (Second Edition) introduces the reader to methods of preventing and resolving problems faced by coaches as well as a collection of 96 case studies [including questions for discussion and examination] dealing with modern day problems and pertinent challenges that face coaches in the amateur sports world. This problem-solving book enables the reader to “put into practice” some of the coaching theories, information, research and “book learning” to practical use through the examination of various problems presented through the case study approach.

Dr. William F. Stier, Jr., a distinguished service professor, is the graduate coordinator of Athletic Administration and directs the coaching certification program and the sports management concentration at the State University of New York at Brockport. He received his Ed.D. from the University of South Dakota and began his coaching career in the junior high schools. On the high school level he has coached cross country, baseball, track and field, and basketball and served as athletic director. At the college level, he coached basketball as well as assumed positions of athletic director and chairperson of Health, Physical Education and Recration in both public and private institutions of higher education. Dr. Stier has authored over 270 scholarly articles and has published sixteen books in sport management, marketing, fundraising and coaching. He presently serves as editor of two scholarly, refereed (blind review) professional journals: The Physical Educator and the International Journal of Sport Management. He is also currently listed in the marquis Who's Who in American Education, Who's Who in America and Who's Who in International Education and has received numerous honors and awards.